A rockin’, rollin’ riding mountain bike trail, actually cobbled together for adventurous horse riders, through the heart of Tasmania that starts easily but soon takes you on a daily roller coaster and occasional push-a-thon. There’s pedalling on back country roads, forestry tracks and fire breaks with the surface sometimes sealed, sometimes boulder hopping, and everything between on the official marked route.

Being Tassie there is a fair probability getting wet, ie, rain, or in the numerous unbridged creek/river crossings. At least that washes off the mud. On the effort scale this is a few steps beyond your standard bike touring circuit of Tassie, better for the mountain bike.

From Devonport on the north coast to Dover, about 100km south of Hobart.

Hema maps Tasmania gives an overview but doesn’t actually show the trail. Best to buy the official Tas Trail guidebook which has maps, a sometimes vague trail description and diagrams of the typography of each of the 15 official stages. Available as a digital download pdf from the Tasmanian Trail Association website for $AU17. It’s well worth the expense, if not essential, as the route marking on the ground isn’t always clear. There’s also the official 1:100,000 Tasmap series as well, available from the (Tasmanian) Map Centre. To cover the entire trip you will need 9 maps, at $9.95 each: Forth, Mersey, Meander, Shannon, Nive, Tyenna, Derwent, Huon, D’Entrecasteaux. There’s also another guidebook, “Cycle the Tasmanian Trail” by Ken White, (Blanche Publications), but it’s from 1997 and may be hard to locate a copy.

Allow 8 days riding doing two sections a day, but more time could be allowed to do justice to the trip if fully self supported. After the first two easier stages the track gets tougher and 30 to 40km, about 4 hours actual riding, might seem sufficient effort for the day. Some of those gradients are a wrestle. 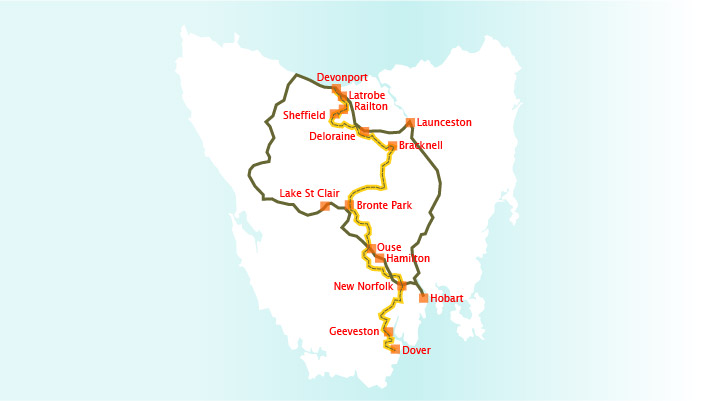 The Tassie Trail is shown in yellow

The trail is good physical workout requiring some technical riding skills and some huffing and puffing getting up some of the inclines. Some getting the feet wet in stream crossings.

All localities have a town supply. Water shouldn’t be an issue. (Complaints are usually of the too much variety rather than too little.) If obtaining water from streams or lakes treatment to protect against giardia is recommended.

Woolies, Coles and IGA supermarkets with nation wide pricing in Devonport and Hobart. Woolies in Deloraine is last chance to top up supplies heading south until the next Woolies in New Norfolk. IGA or similar in Latrobe, Railton, Sheffield, Ouse, New Norfolk, Geeveston and Dover. Open 7 days, 8am – 7pm. Takeaways only in Bracknell. Basic shop in Miena.

Plenty of choice in motels and backpackers in Devonport, Deloraine, New Norfolk, Dover and Hobart. There’s fee paying camping in the caravan parks, that’s with hot showers and other facilities, at Devonport, Deloraine, Bronte Park, Arthurs Lake, New Norfolk, Dover and Hobart. Otherwise it’s free camping out along the way. There are 15 official trail campsites, at no charge, which usually have at least a sheltered picnic table and a (sometimes locked) toilet.

There are a number of attractions along the way, a side trip to Liffy Falls, 58km return from Bracknell with a 500m climb. Another possible daytrip is to visit Lake St Clair.

There’s a few. First the physicality issue. It’s a fair all body workout day after day. There’s plenty of steep hills. The biggest is the 800m vertical grunt up Caves Track to the Central Plateau from Bracknell to Arthurs Lake. The trail is not so easy to follow in places, even with the trail markers, the maps and trail description. Sometime forestry logging confuses the path. There’s the locked gates when you have to traverse some private property for which you need a key. The guidebook has information as to how you can obtain a key. There’s a few less than knee deep creek crossings, at least in times when there’s not heavy rain. And just to keep you on your toes it’s deer shooting season on some parts of the track on the Central Plateau in March, May and June. Mobile phone coverage is patchy in the Highlands, even if you have Telstra, anything else and it’s a communication desert.

There’s been a very useful wiki put together by the combined efforts of Andrew McCoy, Steve Bolto and David Green about the Trail that gives an indication of what the experience entails.

John Dawson has a summary of the Trail sections and an extensive collection of photos.

The official website for the Tasmanian Trail Association has a wealth of info and is the way you can get to download the official Guide for $17.