An attractive alternative for those wishing to avoid the “boring” and busy, ie, caravan and roadtrain laden, North West Coastal Highway from Geraldton to Carnarvon and treadle down a better than average, often sublime, Outback unsealed road on your lonesome.

A few highlights along the way, mainly to do with water, Ballinyoo Bridge, built 1932 when they had grand ideas for this region, at the Murchison River, Bilung Pool, and Rocky Pool, with the opportunity to venture off for a couple of days detour to the dry gorges of the Kennedy Range National Park.

Mullewa to Carnarvon, on the usefully named Carnarvon Mullewa Road, in the Gascoyne region, Western Australia.

Allow 9 days riding to average about 75 km a day and fit in with the most scenic camping locations: Ballinyoo Bridge, Murchison Settlement, Bilung and Rocky Pools. It could be traversed quicker.

Spring is the obvious time when the amazing wildflowers blanket the landscape but really any time April to October inclusive. It’s way too hot in summer. 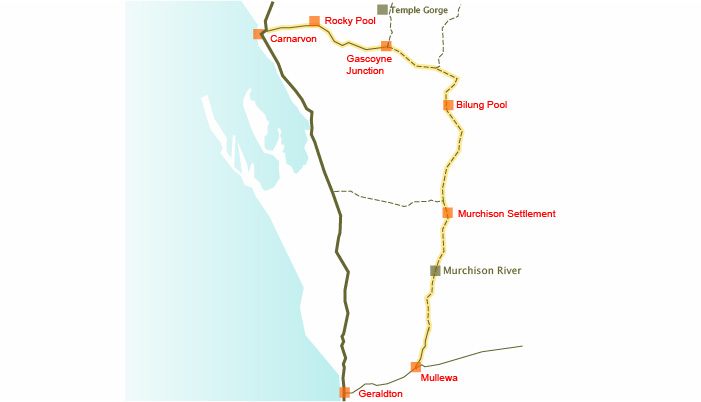 The nearest bike shops are in Geraldton, some basic spares available in Carnarvon at the sports shop.

The road is sealed to the Tallering iron ore mine 50 km north of Mullewa, with large ore filler roadtrains, 4 trailers behind the rig, thundering by every 10 minutes, to or from the port in Geraldton.

After that there’s only occasional tourist traffic, not that much reason for heavy vehicles to use this road, and the road surface is therefore above average quality for most of the way sometimes to clay tennis court standard.

A short section, 15 km or so, is sealed south of Murchison Settlement, then it goes back to the reasonable gravel/clay road until Gascoyne Junction. Not much but occasional tourist traffic on this section, ie, might be fewer than ten 4WDs a day. The last 173 km into Carnarvon is totally sealed and has more traffic.

The 4 km track into Rocky Pool is sandy in places, that will slow you down.

Mullewa, Murchison Settlement, Gascoyne Junction and Carnarvon have a standard town supply, ie, safe for drinking from the tap even if it is sometimes a little salty, even if there’s no real town at the town.

Water from the permanent waterholes at Bilung Pool and Rocky Pool requires filtering, it’s rather green. The Murchison River is as salty as the sea because it drains some salt lakes upstream. The creeks are either in flood, in which case you won’t be there, or dry sandy beds.

Arrive well prepared. Mullewa has surprisingly slim pickings at the small IGA type store or at the Ampol service station, after all it’s only 90 km to a choice of huge supermarkets in Geraldton. Murchison Settlement roadhouse has a small range of essential groceries, frozen bread, pasta, an expensive apple, to go along with the fast foods. The caravan park store in Gascoyne Junction is similarly limited.

Basic caravan parks at Mullewa, $18 per site, pay at Ampol Service station, Murchison Settlement roadhouse, $10 pp, Gascoyne Junction campground, $? a site, who would pay anything to stay here when there are so many better places to have for free?

Camping at Ballinyoo Bridge on the Gascoyne River, Bilung Pool and Rocky Pool, all permanent waterholes, are one of the highlights of the trip. No facilities though.

Good bush camping just about anywhere, including the waterholes, with plenty of firewood around.

The waterholes deserve some time with their profusion of birdlife, and watching the fish and turtles in Bilung Pool. Kennedy Range National Park has Temple and Honeycomb Gorges to marvel at, a 60km each way excursion. You need to take your own water.

The usual need for self reliance here, there is the possibility of less than 10 passing 4WDs a day on this road, well, ain’t that why you are there. Murchison Settlement is not an aboriginal community, just a population of 16, of whom 10 work for the local government.

Ain’t so many who have written about this particular route but my blog from my own travels starts here: Near Pindaring Rocks: out on the Carnarvon Mullewa Road, ie, starting to get remote.

“Mullewa was more or less as expected. Boarded up shops, even the open one, no public power outlets to be seen, a 3 legged dog hopping along the main street without a leash, white spongy bread available, fresh not frozen, but no muesli. Suddenly my favourite biscuit has gone from less than $2 to $3.”