A handy shortcut from Western Australia to the Northern Territory, missing out on the Nullabor and South Australia, but only for the intrepid, ie, it’s a long ride unsupported, out among the sand dunes and camels, the road is often smashed up by the roadtrains and 4WDs, and some of the gaps between permanent water points are 3 days riding.

While the road is generally well maintained it can be soft, or with chunky gravel, for long stretches. Fat tyres, ie, 2”+, are plenty useful and you may spend considerable time whirring away in the granny cog.

1146km with all but the last 42km from Kata Tjuta to Yulara unsealed.

14 days riding to average about 80km a day. On these standard unsealed roads you might find that 80km is enough. A day off in Warburton or Warakurna is a good idea. Allow enough time to walk the Valley of the Winds trail at Kata Tjuta.

April to October inclusive. It’s way to hot in summer, eg, Warburton has 3 weeks 40ºC+ in January on average. 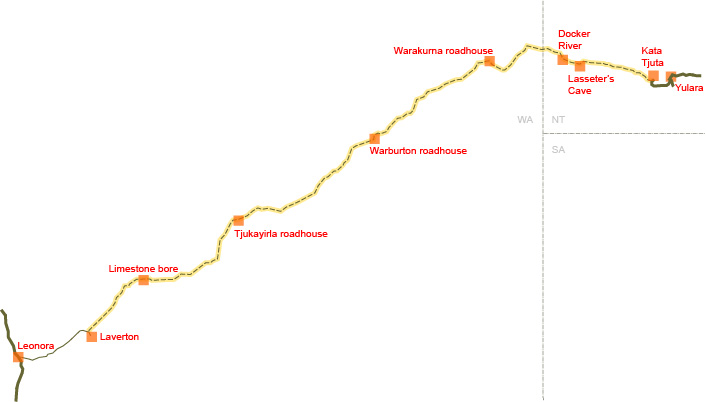 The nearest bike shops are in Kalgoorlie, WA, and Alice Springs, NT, ie, be prepared with a reliable bike and spares.

Reasonable level of challenge on this route. From the west the road is unsealed from the start just out of Laverton until joining the Kata Tjuta Road, 1100km later.

The road is almost continuously maintained and is also in the (slow) process of being substantially upgraded, ie, converted into an “all weather” road, with the addition of 600mm of the natural, unscreened and uncrushed, gravel to the top surface.

While some of the road is clay tennis court style riding there is a fair amount of heavy traffic, ie, roadtrains, and 4WD tourists which continually smash it up. Most of the surface would be classified as either soft, ie, rideable but generally plenty of cadence in the granny cog to plough through, or with that gravel.

There are two notorious stretches, about 70km of sandy road starting about 50km east of Tjukayirla Roadhouse, and then sporadic deep sand from Docker River to Kata Tjuta, all mostly rideable in the granny cog for those with strong thighs or the foresight to ride way up the bank, riding on the slope.

Yeah, water is quite an issue on the GCR. It’s big distances between secure water points but two cattle station bores right next to the road, one called Limestone Bore, break up the longest, 311km, stage between Laverton and Tjukayirla Roadhouse.

The tap water at Laverton, Tjukayirla roadhouse, Warburton roadhouse, Warakurna roadhouse, Docker River shop and Yulara is drinkable without filtering although it can have a slight saline tinge. There is no issue in accessing these public taps.

The options are: self sufficiency, ie, carry it, having a couple of 10 litre water bags with the usual water on the bike is needed here, ie, enough for 2 nights out, 3 days riding; organise water dumps with 4WD travellers you meet at campsites, obviously need some disposable 5, or 10 litre containers; stumble across the road workers with their well provisioned camps; or flag down vehicles when you are close to running out, the off road caravan, or trailer, types seem to carry plenty although there are few of these travelling, the standard 4WDs might offer a litre or two. There is enough traffic, 20 to 40 vehicles a day, that it is unlikely you will expire.

In the Northern Territory there is water in large water tanks at Lasseter’s Cave and in the two car parks at Kata Tjuta.

The water at rockholes is not permanent and is unsuitable for filtering unless you are totally desparate. No water in the sandy creeks.

Food is an issue on the GCR, you can’t rely on anything other than basics in the stores along the way.

IGA supermarkets in Leonora or Yulara are a good place to really stock up, particularly coffee or any speciality items, muesli is considered one out here. Laverton doesn’t currently have a supermarket, just a takeaway and the BP service station with expensive, patchy, groceries: frozen bread, rice, etc. Tjukayirla roadhouse, 8 to 5 weekdays, until 3 at weekends, has terrific takeaways and a small section that runs to pasta and canned food. Warburton roadhouse, 7 to 5 weekdays, until 4 at weekends, has a larger selection, the main store is in the settlement which you are not technically allowed to enter without a permit. Warakurna roadhouse, 8 to 5 weekdays, until 3 at weekends, has takeaways and a small selection of groceries, sense a pattern here? The timing of the deliveries can mean a large variation in what might actually be on the shelves. The Docker River community store has a substantial selection, even fruit and veges, 9 to 12, 2 to 445 weekdays, morning only on Saturday, closed Sunday.

Basic caravan parks at Laverton, around $20 per site, Tjukayirla roadhouse, $20 per site, (get real, there’s a public, cold water shower as an alternative), Warburton roadhouse, $12 for 1, $20 for 2, Warakurna, $10 pp, Yulara campground, $36 a site, $38 at the backpackers, they have a monopoly. Free campsite 3km west of Docker River although having no facilities there is little benefit from staying here.

The two official rest areas just east of Laverton, ie, Deba gnamma (rockhole) and The Pines, are OK but with no facilities. The spiky spinifex limits possibilities to some degree, so keep an eye out for the gravel pit tracks and also sections of the old road. Basically plenty of choice.

The scenery to the west is underwhelming, flattish mulga and spinifex country in the Great Victorian Desert, where the major interest is counting those badly parked, smashed cars and roaming camel congregations but as progress is made to the east, ie Warburton, it improves with some topographical oscillation, and views to hills etc.

Kata Tjuta is a major tourist attraction, hordes visit Walpa Gorge but the Valley of the Winds 7km walk is more spectacular and the numbers are negligible. Uluru deserves a day to do the circuit around the base and the cultural centre.

All travellers on the GCR are required to obtain 2 permits for the journey, one for each for travel through WA and the NT aboriginal areas. On the other hand you are unable to comply with the conditions as you will obviously be camping along the way, something forbidden on the permit. The idea is to stop 4WDs taking alcohol into restricted areas or to stop tourists entering aboriginal settlements. Possibility for being asked to show your permit: unlikely.

Transit permit for WA website requires faxing forms rather than completing online. You may be required to fill out a completely redundant indemnity form as well. Organise with plenty of time for mucking around.

Transit permit for NT website can be self issued over the internet. Easy.

The Great Central Road might not be the Canning Stock Route but it’s not really the best route to take for your initial off-highway bike tour.

Thoughtful preparation is the key to this remote road: long, 1100km of seldom easy dirt riding, and isolated, gee, just to get to the start it’s about 360km from Kalgoorlie to Laverton, 450km Yulara to Alice. There’s no water or food supplies, houses, cattle stations, shops, services, power lines, fences, no nuttin for long stretches, 311km, 249km, 230km, etc. Warburton is the only place with mobile phone or internet reception once you leave Laverton or Yulara although there are pay phones at all the roadhouses.

Food and water need to be considered carefully while in civilisation, ie, Leonora or Yulara, because there are few options on the GCR and they are all expensive. Bike spare parts, ie, patches, new thornproof tubes, etc might also be a trip breaker if you run out.

Remember the two transit permits are legally required although exactly who is going to require you to produce them is unclear.

You are not compelled to pay the $25pp entry fee to the Uluru Kata Tjuta National Park if heading east but they will sting you if travelling west due to the particular road layout. The park entry gates open anywhere from 5 to 6 30am until 7 30 to 9pm depending on the month. You are not permitted to camp in the National Park overnight, in fact are supposed to leave the park by the stated time but it’s easy enough to camp down the Docker River Road and pop out in the morning.

Uluru is one of Australia’s major tourist attractions, there’s everyone from the usual Wicked van backpackers to international tourists paying $500 a night at the 5 star hotel, one of 7 hotels/motels at Yulara. The campground is huge but it stlll might pay to book a few days before during the busy winter season, May to September. It’s surreal to land in the midst of the lipstick tourist hordes after the solitude, and grime, of riding the Great Central Road, care should be taken on the roads due to the vast numbers of gawping drivers and squadrons of rumbling buses.

These 31 images give a general impression of the road conditions you are likely to encounter on the GCR.