Fortunately there’s still a few major tests for the average dirt road bike tourer left in Australia and the Birdsville is up there for those who prefer cycling with some quantity of adversity to overcome.

It might not be as rugged an adventure as it once was, say back in the 1930s but the unsealed highway still presents its challenges: a mainly chunky road surface; goodly distance between supply points, like 523 km; a general lack of facilities along the way; the requirement to plan the water situation; the need for self sufficiency out there.

Still it retains its legendary status due to the overall remoteness, the sparseness of the landscape you traverse, it’s one of the most barren areas in the continent, it really is the whole lot of nothingness you might anticipate, massive vistas across Sturts Stony Desert, the lack of significant sized vegetation, the dry watercourses, the huge sky all making for a compelling Outback experience.

On the other hand there’s always the reassurance that there’s plenty of others out there, although seldom on a bike, it’s an often used shortcut for the rugged 4WDers sitting in air conditioned luxury who can almost crack it out before afternoon tea, there’s 30 – 50 of these types travelling a day in the tourist season.

The other alternative is the spiral bound booklet Birdsville Track from the Outback Travellers Track Series by Greg and Josie Walker which shows photos and every feature along the Track, ie, roads, bores, crests with GPS locations for it all.

It’s way to hot during summer, the average maximum temperature for the months November to March in Birdsville are over 35ºC. 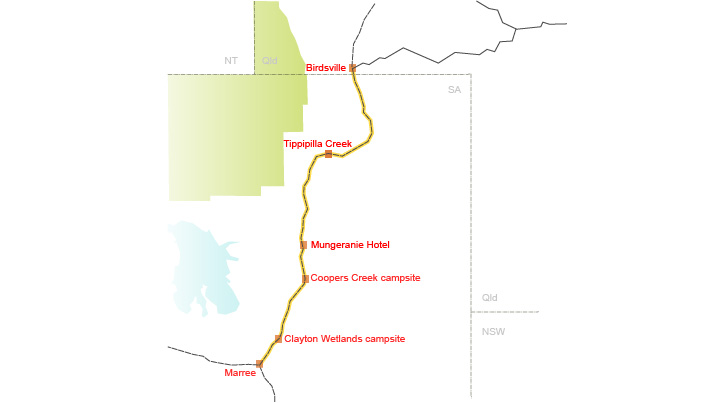 Bring all your own spares of patches, tubes, tyre, spokes, etc, because if you can’t fix it yourself it’s a trip breaker.

Bumpy would be the one word description.

The Birdsville Track has come a long way in recent years from the legendary rugged track from the mid 1900s. It is in fact now a fully formed unsealed highway that varies from magnificent smooth clay, to clay with chunky gravel embedded, to a significant stretch, Blue Ute Bore to the Clifton Hills Station homestead turnoff, about 80km, of just the bumpy chunky gravel, sometimes deep when crossing the dry watercourses.

Despite skirting three deserts there are only limited sections of sand because the road is topped with clay when crossing each of the large number of sand dunes.

Overall the surface is firm, sand is not an issue, but with those bumps the fatter the tyres the less wear and tear on your body.

There’s plenty of vibration to be absorbed so good gel gloves and a well worn in saddle are the go.

Good water carrying capacity is useful as there are limited places where reliable water can be obtained.

Birdsville and Marree have a town supply from artesian bores, better get used to that high salt content that means you drink significantly more to quench your thirst. Mungeranie Pub has similarly flavoured bore water.

The other official campsites along the track: Tippipilla Creek, Cooper Creek and Clayton Wetlands have bore water tanks associated with flushing toilets and a handbasin, Clayton also has a hot shower and spa bath straight from the bore.

There’s also a flowing bore at Mirra Mitta, arrives right on boiling, ie, hotter than 100ºC due to the pressure, and smelling of bad eggs and another bore at Lake Harry ruins of similar quality if lower temperature, ie, suitable for the shower on the side of the road.

In cases of emergency there are a few homesteads close to the track: Pandie Pandie, Clifton Hills, Mulka, Etadunna, Clayton where you could ask. It is cattle country so there are occasional polythene water tanks seen in the distance, well off the track, supplying water to the cattle but getting access to the water in the tanks is often difficult.

The Track cuts through the driest region on the continent where the long term average is less than 150mm of rainfall a year, the creeks can’t be relied on, they flow rarely and if they are flowing it’s unlikely you will be able to get through on the wet and flooded track. Despite this one large water hole at Moongarra Channel retains any wet season water that’s flowed from Northern Queensland for many months.

When it comes down to it this is one track where it may be advisable to relent and accept offers of water from the 4WDers who stop for a chat, those hauling camping trailers are often the most loaded up.

The food situation is pretty simple: ain’t much in the way of options so be prepared.

There’s a good IGA type supermarket in Leigh Creek, a Woolies and Coles in Mt Isa and not exactly a gourmet paradise in between. Stock up on all the luxuries there, coffee, parmesan cheese, soup, etc.

The pickings at the Marree and Birdsville general stores are only good for topping up basics: pasta, rice, oats, cheese, milk powder, etc, supplies often very dependent on when the next supply truck is in.

There’s decent, if expensive burgers and cold beer at the Mungeranie pub and that’s it.

Birdsville has a well appointed caravan park in the centre of town. Marree has two parks, one just out of town to the south and the one in town. Let’s just say the facilities at the Oasis, ($10 pp, 2012) could have been replaced 30 years ago but the important thing is the showers work.

There are 4 official campsites on the Birdsville: Tippipilla Creek, free, 177 km south of Birdsville; Mungeranie pub, ($10pp, 2012), basically for a hot shower and/or a hot, if somewhat murky, outdoor pool to soak most of the dust off and a campsite that looks like anywhere else on the rest of the track; Coopers Creek, free, with toilet; and Clayton Wetlands, $10 per vehicle which I guess means free if you are on your bike, complete with hot shower and spa pool.

Other nights it’s fantastic bush camping, the obvious, actually only, spots where there is any tree cover and clear ground to pitch a tent, in the numerous dry watercourses. Very peaceful indeed, you are unlikely to hear any night time traffic.

You are crossing three deserts here: the edge of the Simpson Desert as you leave Birdsville with the big dunes; Sturts Stony Desert, which is, err, stony, with extensive areas of gibber plains, just almost black pebbles; and the seldom known Tirari Desert, the continent’s only true white sand desert like you find in the Sahara.

The birdlife around the waterholes is thick in the air, it can be disconcerting to have the shadows of the Black Kites wander across the road in front of you as they track you waiting for prey you may flush out.

The major landscape features are the Mungeranie Gap, a small climb up an escarpment with some attractive hills around, around Coopers Creek and Lake Harry which is surprisingly large body of water.

There’s the dingo fence as well, but really the primary sight is the lack of feature.

There’s a few in order.

The Birdsville Inside Track has been closed since the 2010 major flood and looking at the fencing there are no indication that it will open again soon. Don’t plan on taking that much more demanding and isolated option.

The Walkers Crossing Track to Innamincka has also been closed for a similar time.

Bike parts aren’t so easy to come by so be prepared with spare tyre, tubes, etc, the limestone based road can be harsh on the wheels.

Food is a major issue. Stock up before you come.

Think about your water needs and don’t get to the point where you are running out, it can get hot out there at most times of the year and you get through more water than you might think due to its salty flavour.

These 30 images give a general impression of the road conditions and water sources you are likely to encounter out there. And just a few pretty pictures too.