This is the great secret in long distance riding across Australia, kind of like Victoria’s Great Ocean Road. On steroids. Zip around the coast, plenty to see, not much in the way of traffic. What’s not to like?

Well, there is a bit, the first three that come immediately to mind: hills, wind and inclement weather. There’s lashings of all three. It’s a roller coaster, true, but you get to whizz down the hills and it’s mostly less than 20 minutes of up before the down. There’s a fair chance of wind behind you as you head east, that’s a plus, unless, of course, you are riding into it. The weather, basically there can be just far too much of it.

Dunsborough to Esperance, via Margaret River, Augusta, Pemberton, Albany, Stirling Ranges National Park, Fitzgerald River National Park and Hopetoun. Should mention Starvation Cove and Munglinup Beach. The majority of the kms can be on unsealed roads.

Allow 3 weeks riding to do a standard approximately 70km stage a day. And another week to look at the national parks or take a break along the way. On the unsealed roads you will find that 70km is usually more than enough. (Some have been known to take, err, 38 days on this ride.)

Best December to March. That’s the drier time of the year and the proximity to the coast keeps it, mostly, not excessively hot. Can be wet and windy during winter. 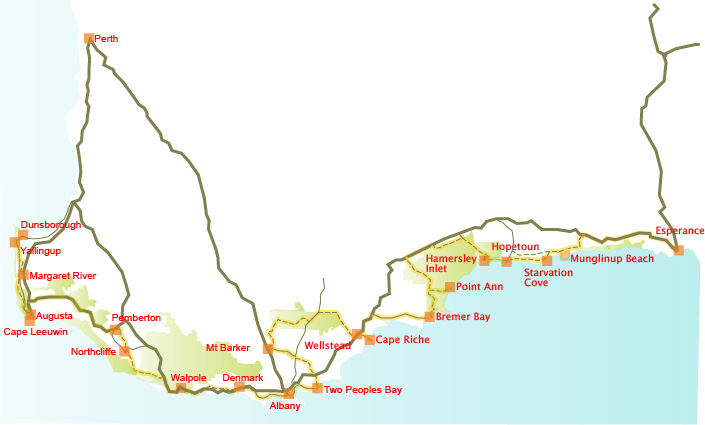 There’s no fixed or obvious route along here. Some may just plod on down the highway but there’s plenty of opportunity for the well equipped to take your time seeing some amazing country by heading off-main-road.

Think Caves Road to start from Dunsborough, then cut across to Cowaramup to the railtrail to Margaret River then heading into the Leeuwin Naturaliste National Park via Boranup Road, or even further west on the national park tracks near the Point Road campsite. Cape Leeuwin is a must. Then head off on the Brockman/Vasse Highways until Pemberton. You can have a go at the trails off to the south but much of the country is just a huge sandpit, ie not much fun.

From Pemberton it’s possible to go cross country from the Gloucester Tree to Northcliffe and follow down along Gardiner/Chesapeake Road through more big trees until you hit Walpole. The excuse for missing Windy Harbour is that, err, it’s windy. There’s the Denmark/ Nornalup rail trail and a backroad to get you to Albany.

Two Peoples Bay is worth a look and if you are keen you can get your bike down the north end. (Where the sand is steep, it’s soft.) Then heading up via Porongurup National Park to Mt Barker and on through Stirling Ranges. Cape Riche is a short diversion on the way to Bremer Bay. Bremer Bay to Point Ann in the Fitzgerald National Park via Quaalup gets you away from traffic but you have to hit the highway for a few kms before heading back down through the national park, on the exciting Old Ongerup Road, (generally hard surface) and Hamersley Drive, with a side trip to Hamersley Inlet, and on to Hopetoun.

The last leg on Southern Ocean East Road skirts the coast via Starvation Cove, Munglinup Inlet and onto Springdale Road. The last 70km into Esperance is on the highway.

Be prepared to carry water as the supply point can be a fair way apart once you get out of the towns and into the off-main-road areas. There’s obviously water in all the towns/settlements etc. There’s watertanks at Moingup Springs in Stirling Ranges National Park, Point Ann in Fitzgerald River National Park, at the Jacup wheat silos near Fitzgerald, Munglinup Beach. The places where water becomes an issue are traversing Fitzgerald River National Park, (none at Hamersley Inlet), and heading east of Hopetoun, (none at Starvation Cove).

Coles or Woolworths supermarkets with nation wide pricing in Dunsborough, Margaret River, Albany and Esperance. Note, these are currently not open on Sundays or even late on weekday evenings, but as we move into the second decade of the 21st Century it appears that this may change soon. IGA’s in Augusta, Pemberton, Walpole, Denmark, Mt Barker and Hopetoun have better hours, usually 7am to 7pm, 7 days a week. Decent general stores in Northcliffe and Bremer Bay. Small store at Wellstead.

This is a great area to start learning how to camp, well, just anywhere. Off the main roads there are good spots particularly near the coastal inlets, of which there are many. If you are sick of the weather, or are travelling with a hefty budget there are various caravan parks, motels etc in the towns along the way. Backpackers in Dunsborough, Margaret River, Pemberton, Albany and Esperance.

Gotta get to Yallingup to see the big surf if it’s up, a few caves around Leeuwin Naturaliste National Park, Cape Leeuwin lighthouse, just to get to the furtherest corner of the Australian continent and see the Indian and Southern Oceans meet. Climb the Gloucester tree near Pemberton, much more heart pounding than the Valley of the Giants walk, Little Beach near Two Peoples Bay, bike Stirling Range Drive, wander round Point Ann, see the swans at Hamersley Inlet at Fitzgerald River National Park, Starvation Cove and the Rabbit Proof Fence, Munglinup Beach and, of course, the delights of Esperance.

Just the food and water issues. As they say, be prepared. The Gairdner, Fitzgerald and Hamersley Rivers are saltier than the sea and those picturesque inlets are as well.