Wow. What a blast. The Munda Biddi is one huge, fun, ride, with plenty of sweat, toil, and hardship thrown in.

The advertising says a lot about the “world class” trail that finally stretches from Mundaring, (only about 35km east of downtown Perth), to Albany. No official word as to the exact length, somewhere between 1100 and 1000km, ie, long enough, that makes it the longest off road mountain bike trail in the universe, apparently. This is mountain bike territory, not really a family touring bike trail like the Mawson Trail in South Australia, despite the official blurb. It’s aimed at a lightly loaded bike, with fat tyres, or semi-supported expeditions. The reason is that there’s a fair amount of difficult track surface, (pea gravel, sometimes deep and at times not rideable, further south there’s patches of sand) along the way which combined with the generally undulating terrain makes for a fairly physical adventure. She’s a full on wrestle on a roller coaster for anyone with a touring load aboard. Despite that there are long sections each day, mostly, where the riding is just sublime, long stretches, kilometres in a go, whizzing downhill on narrow single track through the forest. There’s buckets of fun on this little adventure, just don’t underestimate the amount of effort required.

Mundaring to Albany, Western Australia, yes, it’s finally finished after more than a decade. Construction was completed on the Munda Biddi in April 2013.

Around 1100km, the official trail length has somehow eluded documentation.

9 dedicated Munda Biddi maps, are available online at WA outdoor shops, or the Munda Biddi Foundation in Perth, for $AU11 each. They are hugely detailed and well worth the expense despite the generally reasonable track markings. There’s those moments when you come off the trail, or can’t find a track marker, when the map is essential. Helpful even to plan each day. They show how to get into and out of the towns and that’s surprisingly useful. Also shows the typography although the catagorisation of the terrain is sometimes off the mark, ie easier or harder depending on the direction of travel. Note there are often temporary minor changes to the route due to logging, or fires, and these are, usually, clearly marked on the trail itself.

Maps of the section from Manjimup to Albany were officially available from 8th April 2013.

Allow about 20 days riding to do a standard approximately 45 km stage a day between shelters and towns. Expect to chug along at around 8 to 10 km/hour if you are carrying a load. It is possible to jump a shelter with longer daylight hours around Christmas but best then to be travelling light. Or just do a few sections if you have less time. 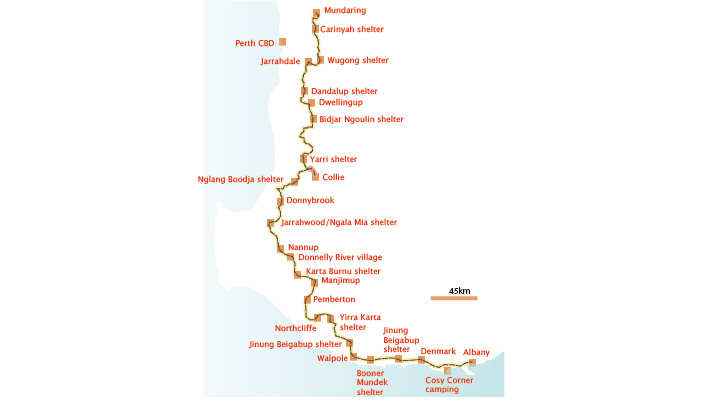 The trail is a huge physical workout requiring some technical riding skills on the steep parts mostly near the Mundaring end. The undulations total more than 4000 m elevation. It’s often hilly although there are also long stretches of track along abandoned timber tramways, ie flattish. In the north the emphasis is on longer steeper hills that gets much more use by day riders, and sharing by weekend trail bike riders travelling, illegally, in a noisy convoy. The pea gravel sections, more in the north, are tough particularly when combines with a slope. The maps show a number of alternative “touring routes” which are often sufficient effort for all but those unencumbered with baggage. The south is less travelled, the slopes are more moderate and there are long sections of magnificent single track riding.

The towns, Mundaring, Jarrahdale, Dwellingup, Collie, Donnybrook, Nannup, Manjimup, Denmark, Albany have a, umm, town supply. Water is available at each of the eight shelters from two large rainwater tanks. There are also taps at the picnic areas near Mundaring Weir, North Dandelup Dam, Logue Brook. There’s a small watertank at Crooked Brook picnic area if it’s rained recently. Water shouldn’t be an issue other than having to carry about 4 or 5 litres for drinking during the day.

Coles and Woolworths supermarkets with nation wide pricing in Mundaring, Collie and Manjimup. Note, these are not currently open on Sundays or even for weekday evenings. IGA in Donnybrook and Nannup, 7 am to 7 pm. The grocery store in Dwellingup has the basics as well as takeaways. Only a very limited number of expensive groceries and takeaways at Jarrahdale. No shop at all in Jarrahwood. You need to bring your own gas or fuel stove, fires aren’t permitted along the way.

There’s some really good news about this trail: there are 12 purpose built shelters along the way which also have a few small camping areas for a tent. These are 3 sided rooms with sleeping platforms to accommodate about 20 people at a squash. (Often there will actually be 19 less than maximum capacity.) There are sheltered picnic tables, decent, but non-flushing toilets and a couple of 5000 litre, ie, big, rainwater tanks to replenish supplies. Cost is a very reasonable, nuttin. Yes, they are free. Allegedly camping is only allowed in these officially sanctioned sites although there are other free camping sites at Marrinup, near Dwellingup, (pit toilets and picnic tables only). There are various caravan parks, pubs, motels etc in the towns along the way.

There are a number of low key attractions along the way, the view of the Indian Ocean from Dandelup Shelter, the Arboreatum, some dams, the Mundaring Weir and pipeline. The main attraction is the jarrah/karri forest along the way.

Mainly the physicality issue. It’s not really for the family groups shown in the information photos. The maps showing the route into Collie are confusing as it isn’t clear that you return on the same trail. The overlap on the maps doesn’t show the continuation of the trail or even the track junction. The maps prove very useful if, for any reason, you come off the trail.

The Munda Biddi Foundation promotes and assists in the maintenance of the track.

An exhaustive, and eventually very funny blog of Ben Mok’s solo expedition in 2008. When you have finished his very complete story you will feel like you have already done the ride. Sadly Ben was hit by a car in Singapore while on one of his day rides and died on 24 March 2010.

For another, less analytical, blog on the trail look at my personal story at Munda Biddi roller coaster.

Once up to Stromlo Road I stayed on the trail for a ripping, 5km single track, a firm surface for once, all downhill, front wheel sliding, (who cares?), ducking stray foliage, a face full of spider webs, and their spiders, rather too often, the best, most joyous fun for the trip, just unexpected after all the too much loose stuff downhills recently and followed by another 5km of almost overgrown, near horizontal single track.

These 27 images give a general impression of the track conditions you are likely to encounter out there. And just a few pretty pictures too.