Kakado, Kakadon’t is the Grey Nomad’s line when discussing the merits of the area. Yeah, it’s a sealed highway loop but most of the interesting sights in the national park are well off the Kakadu Highway on unsealed roads, you can’t see everything, or anything much, from your car seat with the window rolled down, you have to make an effort. (The Arnham Highway has less of interest.) Koolpin Gorge, Gunlom, Maguk, Twin Falls all take a bit of getting to. Caravan’s just can’t hack it and many don’t want to risk their car on the dirt.

Not so bad for those on an off-road bike, a mountain bike is handy, the essential sights, Ubirr, Nourlangie Rock, Maguk, Twin & Jim Jim Falls, Koolpin Gorge, oh, and those crocs down at Cahill’s Crossing, etc, are every bit as good as the tourist advertising proclaims.

Pine Creek to Darwin via the Kakadu and Arnhem Highways, Northern Territory.

The Hema Kakadu map is useful and adequately detailed.

allow 6 days riding for the basic loop with extra days off to head off down those detours.

May to September. The dirt roads are closed in the Wet Season, but you wouldn’t want to be there then anyway. (Extreme heat and humidity.) 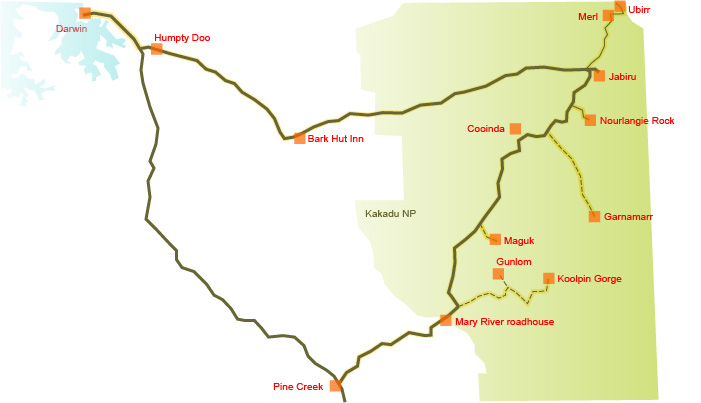 70km each way to Koolpin Gorge on an unsealed road that starts soft and corrugated but gets better as it heads down the hill. There are 2 crossings over the South Alligator River, salt water croc territory, but there is not so much volume of water up here, it’s not too long or deep. The last 5km past the locked gate is on a 4WD track that is great to ride. 10km each way to Maguk on a reasonable unsealed road through termite land. It’s called 4WD only but the dry creek crossing that might stop a 2WD car is short. 50km each way to Garnamarr campsite on a reasonable unsealed road. No creek crossings on the road to the campsite. From Garnamarr the road to Twin Falls is sandy for 14km each way, big, deep, sand, and has a deep river crossing in salt water croc territory. Suggest hitching for the day is a better option even without any load. There’s a fair amount of 4WD traffic. Twin Falls has a pool for swimming at the top that has an interesting walk up to see the big view. Jim Jim swimming is more shaded. The Kakadu Highway has much less traffic south of the main tourist trap Cooinda. The Arnhem Highway has plenty of day trippers and tourists heading to and from Darwin and less of interest along the way. The road to Nourlangie Rock and out to Ubirr is sealed. The last 35 km into Darwin along the Stuart Highway is very busy but is 2 lanes all the way with a decent shoulder most of the way. The last few kilometres can be done on a bikepath.

Not such a problem. Pine Creek and Darwin both have town supplies that is safe to drink from the tap. All national park caravan parks have rain water tanks. The bush camping sites don’t. Water is also available at Mary River roadhouse, Cooinda, Jabiru, Ubirr, Bark Hut and Corroboree Park Inn.

Two IGA style supermarkets open 7 days until 7pm in Pine Creek to service the locals and passing tourists. Mary River roadhouse has takeaways only and expensive frozen white spongy bread. Gagudju Lodge at Cooinda has a small store with a limited range of expensive groceries, mostly chocolate biscuits and icecreams. Jabiru has a large well stocked IGA. The border store at Ubirr sells postcards, more icecreams and a few patchy groceries. Similar slim offerings at Bark Hut and Corroboree Park Inn. By the time you reach Humpty Doo it’s not far to Darwin. Coles and Woolworths supermarkets with nation wide pricing in Darwin.

Pine Creek has a few caravan parks, about $25 per site (2009,) but why stay there when there’s free camping anywhere down the road. Actually, the Harriet Creek roadside stop is a better bet. No toilets or other facilities but the picnic tables are useful. It’s off the road but you will be sharing with the motorised brigade. The national park has two types of camping areas: well serviced caravan parks with hot showers, flush toilets, barbecues, rain water tanks and a resident ranger to take your money, ($10pp). Better avoided except for the scenic Garnamarr and Merl campsite at Ubirr which have a monopoly. There are also official bush camping areas, ($5pp), for the more hardy, usually down a 4WD track with just pit toilets and picnic tables. These can be located at scenic locations: Sandy Billabong, Jim Jim billabong, Maguk, Koolpin Gorge, although sometimes they are not quite so scenic: Kambolgie, Gungaraul. Heading down the Arnhem Highway there are a possibilities for bush camping but note that the low lying areas are swampy. In Darwin the caravan parks are generally out of town and it might prove better value to crash at one of the many backpackers in Mitchell Street, or better, Frogs Hollow which is a short walk from the nightlife area.

Apart from the gorges which are as dramatic as they appear in the brochures there’s the wildlife to observe and the aboriginal rock art The Yellow Water cruise is a top tourist attraction and is very busy, the more expensive dawn cruise that includes brekkie, ($100 each), is more likely to see the wildlife but it gets booked out. You do have the opportunity to see billabongs at Jim Jim Billabong and near Nourlangie Rock so you won’t entirely miss out if you save your bucks. Salt water crocs can be seen in some numbers down at Cahill Crossing near Ubirr at your leisure. If you time it right you can catch them surfing upstream on the tide snapping at the big barramundi fish. Both Nourlangie Rock and Ubirr are must to visit, they are Australia’s most accessible aboriginal rock painting sites and are both free to view. From Nourlangie Rock there’s a 8km walk that few of those bussed in take that heads through sculpted sandstone hills to another smaller rock art site and return. It’s traditional for tourists to perch on the top of Ubirr to watch the sun sink into the wetlands. Swim only at the top of the waterfalls but Maguk, while small, is the particular highlight in the park for taking a dip. With Koolpin Gorge a close second. Gunlom attracts the motorised types, but if you’re up at Koolpin then why not?

Well, crocodile warning signage, EXTREME DANGER, they shout, is around at all the waterholes. And so are the crocs. The signs are there for a reason, people have been taken when cooling off in the water in the park. Remember you will never see the one that gets you. A permit is required to camp at Koolpin Gorge which takes some time, hours, to arrange at the Mary River information office, or quicker from the Bowali Visitor centre from the other end. Don’t take a key for the gate as it’s possible to wheel your bike under the boom gate that keeps out the 4WDs. Getting the key back to the office to get the $50 refund would be a massive pain. Remember to stock up on food to spend enough time off the main road. Jabiru is good to get you on to Darwin.

These 25 images give a general impression of the road conditions you are likely to encounter out there.