A humungous muddy river, dirt tracks adjacent, through extensive River Red Gum forests, riverside campsites, many free, the possibility of a cooling swim, paddle boats, wildlife, not so many hills for 80% of the way, plenty of occasional civilisation to restock supplies, proximity to population centres, there’s lots of reasons to try this trail.

Helps that there is excellent access, after all you can start, or finish, close to Adelaide, or Canberra, and that the full ride can be achieved in various stages if 3 or 4 weeks doesn’t easily fit in your schedule.

Best parts, if you have an adventurous spirit are: the Murray Mouth at Goolwa around to Wellington; Renmark to Wentworth on the remote north side via the extraordinary Rufus River, it’s the birdlife; the riverside tracks through the State Forests from Swan Hill to Torrumbarry Weir; more forest trails from Mathoura to Tocumwal; and then pretty much everything from the ferry at Wyman above the Hume Weir until Jindabyne.

All bike tourers should at least do the impressive Swan Hill to Echuca section which is mostly right by the river and has numerous free official campsites perched on the banks.

Goolwa, South Australia to Jindabyne, New South Wales via a choice of routes.

The chunk on the forest tracks along the river between Swan Hill and Tocumwal is possibly the most rewarding if time is an issue.

Cartographics Murray River and Mallee, South Australia 1: 350,000 is indispensable for the SA sector showing a good level of detail of the river, all the dirt tracks, the road names and routes through the towns. Pity there aren’t similar river based maps for the rest of the route.

Once you get to NSW and Victoria it’s possible to be crossing the river a few times but the large scale maps are generally state based and don’t show much detail on the opposite side of the river. The Hema Victoria East and West Map 1: 750,000, rep $9.95, is probably the most useful as a general guide for planning.

Allow 3 or 4 weeks riding if you want the full dirt road experience but plan a rest day or two along the way at those free riverside campsites in the State Forests.

Best October to early January and March to May to avoid the summer heat and bushfire risk, and the winter cold. 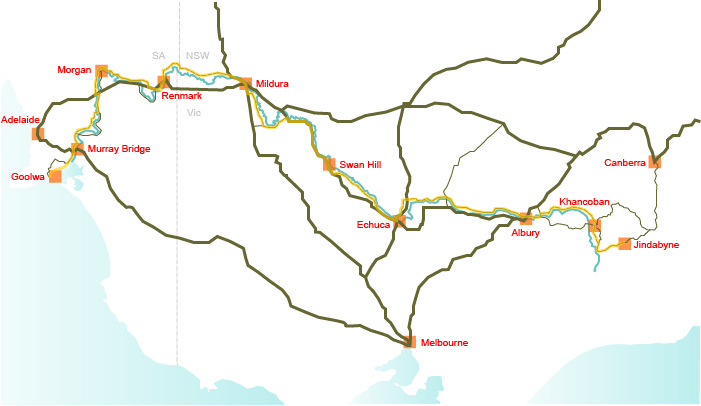 Although the route is generally well serviced it’s worth bringing your own spares of patches, tubes, etc.

You can ride this on the bitumen almost all the way but to qualify as a Little Adventure you really need to make use of the unsealed roads and riverside tracks to the maximum, little traffic, more remote, closer to the natural landscape, and there’s plenty of variation and possibilities.

Worth a look at the mouth of the Murray which requires a short bike ride from Goolwa, 10km, then a 1.5 hour, each way, stroll down the beach to find the fishermen hauling in their catch, they drive down the beach. Note: you can’t cross the river on any of the barrages.

It’s possible to follow around Lake Alexandrina on almost deserted roads, even some dirt if you want the direct route, to Wellington, then follow the west bank as far as Walker Flat, hop on the free ferry, all the ferries over the Murray are free, on the east bank to Blanchetown then cross the bridge back west for the great dirt to Morgan. Staying on the north side, the river turns a corner, at Berri zip back south across the river for a short stretch and back across on the ferry at Lyrup then on to Renmark.

The north side of the river gives great remote territory feeling riding on the dirt through Rufus River to Wentworth and then civilisation in Mildura.

At Redcliffs you can peel off through the Hattah-Kulkyne National Park but from there it’s quite a ride with fellow travellers of the motorised kind on the asphalt until Swan Hill.

From there it’s one of the highlights of the tour closely following the Murray through first Pental Island, note that you must go through Fish Point and Benjeroop to get through to Murrabit, the direct route indicated on large scale maps is cut by a deep channel which is not, and then the magnificent Gunbower State Forest through to Torrumbarry Weir and by main road into Echuca. Also note that the river track in the northernmost section of the State Forest just south of Murrabit has been washed out in one place by the 2010 floods and the track is not used by vehicles but it is clear and possible to follow without too much concern.

After Echuca you can either cross back to NSW taking the great dirt road along the railway track to Mathoura then through the new Millawa National Park on the river track to Tocumwal, or, staying in Victoria try the Barmah National Park.

From Toc it’s either one side of the river or the other to Albury and on to the Hume Weir, the NSW side is probably preferable, more direct and maybe not as much traffic.

The bridge over the weir takes you into Victoria but you can jump back over the river for a final time on the free ferry at Wynum for a mostly dirt surface to Khancoban, much less traffic on the north, NSW, side.

Rather than joining the tourists on the Alpine Way the alternative for another Little Adventure is to make a right hand turn just out of town, immediately before the big climb, onto Power Station Road and when the seal ends take a track that leads to Geehi Walls Trail, there’s initially a Road Closed sign but the track is part of the National Horse Trail and the gates aren’t locked for the few hundred metres you cross private land before reaching the National Park. Great riding through to Geehi where there’s the longest climb in Australia awaiting, up Dead Horse Gap but once over it’s almost all downhill to Jindabyne.

The town supply in any of the settlements is filtered and treated, ie, safe and the taps are close enough that carrying large volumes of fluid id generally unnecessary.

The stretch around Rufus River is the major issue, no safe water supply between Renmark and Wentworth, but there is a rainwater tank at the information shelter at the Rufus River and, of course, the huge lake and flowing outlet, both need treatment.

The water from the Murray, Rufus, etc, is somewhat murky and filtering is in order to remove the blue green algae, etc. Best to filter from your pot where the water has been allowed to settle for a few minutes and use a coffee filter on the intake as the river mud can quickly clog your water filter. Be prepared to clean the insides of the filter every 500ml, it can be a bit of a task.

Mannum, Swan Reach, Morgan, Wentworth, Tocumwal and Khancoban all have IGAs of varying sizes and usefulness.

Obtaining sufficient calories along the route should not be an issue.

There are plenty of well spaced caravan parks of varying quality along the river for those who prefer to pay for their shower. In general they offer limited amenity for the self contained bike tourer.

For those of a more adventurous disposition who can cope with using the river as a free bath there’s plenty of free camping sites to be found, many of them officially free: Heron Bend near the Overland Hotel, Lyrup Flat in the Murray River National Park, (that’s the only pay one in this list), Rufus River, many river campsites in Hattah-Kulkyne NP, Campbell Island and Gunbower State Forest, Kyffins Reserve at Lake Mulwalla, the rest area on the Victorian side of the Murray at Howlong, Jingellic Reserve behind the pub and various Geehi campsites in Koscuiszko NP

The Murray Mouth and nearby barrage is worth a look, you have to wander down the beach for a few k to watch the river flowing into the sea.

The river wildlife, mainly birds, is thick on the ground and air but Rufus River, 100s of birds feeding in the river outfall from the lake, and the numerous kangaroos at Geehi Flats have particular appeal.

The State Forests between Swan Hill and Tocumwal with the big River Red Gums are great to ride through, as are the Hattah-Kulkyne and Kosciuszko National Parks.

Those who like river history will enjoy the paddle steamers at Morgan, great little historic settlement with an old railway station and the Paddle steamer capital of the world, apparently, Echuca, which also has a historic wharf and port area.

And there’s always the river.

Not too much in particular to worry about on this trail, you are often close to well serviced towns and there’s generally people close by for any emergency, in fact there’s extensive although not complete Telstra mobile coverage much of the way.

Water is an issue, drinking straight from the murky Murray is not recommended, treatment is required either by filtering, clogging a problem due to the mud, or chemical means. Don’t run out between Renmark and Rufus River.

These 30 images give a general impression of the road, umm, track, conditions and water sources you are likely to encounter out there. And just a few pretty pictures too.